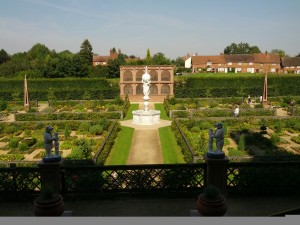 When most people travel to the central Midlands county of Warwickshire, they most often head to Stratford-upon-Avon to visit much heralded Shakespeare Country or the theatres of the Royal Shakespeare Company. The second most popular destination would then probably be the historic town of Warwick, complete with its large medieval Castle, certainly a main tourist attraction within the UK.

My suggestion would be to also visit the historic town of Kenilworth just 10 minutes or so from Warwick, complete with its own Castle run by English Heritage and recognised, by many, as one of the most spectacular ruins in England.

Kenilworth castle was a lake fortress and dates from Norman times. With its great tower built in 1120s by royal chamberlain Godfrey de Clinton, to the Great Hall built by John of Gaunt between 1373 and 1380, the Castle and its ruins offers plenty of opportunity to soak up its history, its views of Warwickshire countryside from climbing the high walls to walking around the lush greenery of its Outer Court. Home to Kings of England from King John, to Lancastrian Kings in the 15th Century.

Kenilworth Castle was probably at its most splendid during Tudor times – a favourite haunt of Henry VIII due to Warwickshire’s plentiful hunting grounds. Kenilworth castle was also home of Robert Dudley, the 1st Earl of Leicester, a great love of Queen Elizabeth I as seen in some films and part of which was played out at this very place.

Kenilworth Castle’s Elizabethan Garden was created, by Dudley, for a visit by Queen Elizabeth I in 1575 but was lovingly restored in recent years, complete with its aviary and marble fountain, which is the largest reconstruction of its type in the country.

The castle has a small gift shop, a tea room, an audio tour which is free, as is parking, and lovely picnic areas around the grounds, if you choose to take your own picnic with you.

Family tickets from £21.30 for up to 3 children, adults £8.20 although free entry for English Heritage members, which if you like these kind of venues is worth considering. The Castle runs events such as Jousting Tournaments, a Knights Scholl for Dad’s and even family sleepovers at times during the year.

Kenilworth, itself, is a small parish town with a variety of shops and interesting restaurants, great for a day visit and with its Castle – well worth paying a visit.

There are a number of campsites in the area and two Camping and Caravanning certificated sites in the Kenilworth area, called Springfield House and Greenfield if you would like to try the less expensive option.

Now we are out of the peak season, most motorhome hire companies are offering vastly reduced campervan hire rates. So why not take a long weekend or even a week to explore England, right now?